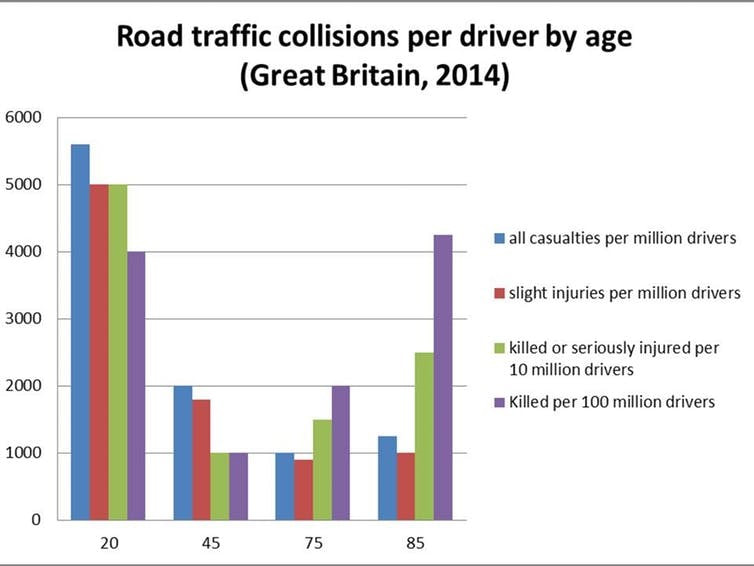 Driving has become both such a necessity and a desire that giving-up driving has been shown to be linked to loneliness and isolation and an increase in depression and health related problems and some studies show a direct link to mortality. But, are older drivers safe to continue driving? A range of cognitive and physiological changes as we age can hamper our driver behaviour, for example deterioration in working memory, cognitive overload, and eyesight (recovering from glare from a low sun or from another vehicle, for example, can change from 2 seconds of white out to as much as 9 seconds), that may prolong reaction time (over 65 can be 22 times slower than an under 30 year old), make making manoeuvres difficult could potentially make driving dangerous.  Looking at the data that is collected by police at the scene of a road traffic collision, the STATS19 dataset, suggests there is a slight increase in injuries and deaths from driving from 75 years onwards (see graph) especially per mile driven. However, closer inspection suggests that much, if not almost all, of the increase is due to frailty or fragility. Older people are more likely to be injured from the collisions they have due to their increasing frailty. Hence, older people seem to compensate well for changes in cognition and eyesight, mainly by picking and choosing when and on what roads to drive (avoiding heavy traffic or certain types of road and avoiding situations with low sun or at night, for example).  This ability to choose could change, though, if we all work later on in life and have less choice over when and where to travel.

Older people do have a different road traffic collision typology, however. My research, concurring with previous research, suggests that older people are over represented in collisions turning right in the UK, across the traffic, particularly at non signalised junctions.
Of course there are problems of road safety for all age groups and older people are certainly no exception. There is a need to always be aware of limitations and alter behaviour accordingly, which may mean even giving up driving all together. We know that testing doesn’t seem to work, in countries or part of a country where there are more stringent tests, for example in New South Wales, Australia, has medical assessments for those at 80 years and an on road test at 85 years, have no different levels of collision rates for older drivers (or any other driver) than Victoria, where there is none. A great overview of evidence across other places finds similar findings.  Education and training could well be the answer and there are some great examples out there but to date limited evidence that they make any long term difference to safety, though short-term results seem useful, it is likely regular continual education and training is needed for full effect. We do know successfully giving up driving involves planning to give-up a long way in advance of actually having to do so, of having supportive people around them, family and friends offering emotional and practical support, and trialling out using alternatives to the car before they need to do so. It seems females are better at this than males.

Overall, driving is becoming more prevalent for older people and on the whole older drivers are as safe as other road users, often compensating well for changes in physiology and cognition, but that doesn’t mean we should stop looking for ways to improve driver behaviour or alternatives to driving.